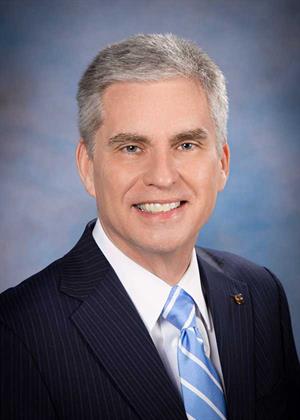 Curtis Barnett serves as president and chief executive officer for Arkansas Blue Cross and Blue Shield which serves more than 2 million members nationwide. As president and CEO, Barnett is leading Arkansas Blue Cross’ efforts to help transform healthcare, striving to make it more affordable and a more compassionate system. He has spearheaded new work on behavioral health and health equity and spoken nationally on such subjects as the importance of private and public collaboration for changing how healthcare services are reimbursed and the role of health plans in addressing the social determinants of health, especially food insecurity.

In Arkansas, Barnett serves on several industry and community boards of directors, including the University of Central Arkansas Board of Trustees, where he serves as vice chair, the dean’s executive advisory board for the University of Arkansas Walton College of Business, the Arkansas Research Alliance, and the executive committee for the Arkansas State Chamber of Commerce, where he serves as vice chair.

Barnett actively supports a number of charitable organizations, including the Arkansas Hunger Relief Alliance and the Cystic Fibrosis Foundation, which named him their Breath of Life honoree in 2015. His alma mater, the University of Central Arkansas, presented him with their Distinguished Alumnus Award in 2018.

Our new ArkansasBlue Welcome Center is now open in Fayetteville!

Important: Blueprint Portal will not load if you are using Internet Explorer.